Are You Committing This Crime?

Rooney Rule:  You are a product of your priorities.  And so are the products that you produce!

Now that my new book Coach to Coach is coming out in a few days, a lot of people are asking for my advice how they can take on a major project like writing a book.  When I tell them the list of things they have to do in order to get something like a book done, many give me a classic excuse: “I am too busy to do that!”

That is when I smile and ask if it is ok for me to play forensic investigator for a moment. (As you may or may not know, forensic science is used to examine the evidence of a scene to help determine the innocence or guilt of a suspect.)

If they say “yes,” then I do a little exploring into their lives and the supposed reasons behind why they are so busy.  We usually discover that time was never the criminal behind why the books they wanted to write or the goals they wanted to achieve are not being completed.  The evidence usually shows these people have the time.  Their crime is not being busy; it is their lack of priority.

Now how about you?

If I did a forensic investigation of your life over the last 6 months detailing everywhere you spent your time, what would I find?  Imagine I had a log of all your internet searches, your social media surfing, the TV and movies you watched, and the apps and texts resulting in your screen time.  What would it tell me about you and your priorities?  Does the thought of me peering into your life like that make you nervous?  Well, not only would the evidence tell me how much time you were spending per week on those things, but the details of what you were doing would also tell me what you value as the most important use of your time.

And if the thought of the results of this investigation sounds a bit scary, then that fear should be all the more reason that a change in your priorities might be long overdue.

Even though my book Coach to Coach is releasing, I know you may not be interested in ever writing a book.  But I am sure you have something different in mind that you would like to achieve.  Most people I meet also usually want to lose weight, make more money, learn a musical instrument, develop a new skill and or improve their relationships.  But then when I investigate those same people’s actions with them, those same people spend little or no time on any of those things.

The crime again isn’t a lack of time or a lack of ideas; it is a lack of priority.

Would you like to do any of the things listed above?

Is there some achievement or skill you really want?

Well what are you currently doing about it?

After examining how you are spending your days, if your answer to the last question is “nothing,” then maybe you don’t really want it as bad as you think.  Or maybe you just have to be reminded to get your priorities straight.

And even when you have your priorities straight, they are eventually going to change again.

Once my new book was written, I thought I had done the work.  Then I was quickly reminded by the publisher that the work hadn’t even started yet!  There were websites to build, testimonials to get, podcasts to secure, speeches to book, blogs and emails like this to write and much more.

As you might expect, I told everyone I was too busy.  I didn’t think I had the time.

And then luckily a mentor of mine not only did a little forensic science on my own life to prove I had more time than I imagined, but he gave me the following story which I needed to hear in order to help me reset my priorities.  And ironically for me, the story had to do with 5 simple things.

The Jack Canfield “Rule of 5”

You may have heard of Jack Canfield.  If not, then you are surely familiar with his series of books that he co-authored with Mark Victor Hansen called Chicken Soup for the Soul which now has over 225 books in print and a total sales of over 500 million copies worldwide in 47 languages. Today Jack is a world-renowned speaker on a number of business related topics.  But back in the early 1990’s, he was an unproven author trying to figure out how to sell books.

He and Victor Hansen thought they were trying everything.  They were seeking advice from other authors and were given even more ideas.  As a result, as you can imagine, they too thought there wasn’t enough time to create a best-seller.  They too decide they were “too busy.”

Confused with all the choices of how to spend their time, Canfield and Hansen received a simple, yet profound lesson from a spiritual teacher. To teach the lesson, he used this analogy of a lumberjack chopping down a tree:

“If you go every day to a tree and take five swings at it with an axe, eventually, no matter how large the tree, it would have to fall down.”

Using this idea, Canfield and Hansen created what they called “The Rule of Five.” The idea behind the rule was they would commit to taking five daily actions that would sell some books. So, every day after that, the authors would do at least 5 different things each day that would move the book forward.  They had not only made making that list a priority, but with The Rule of Five, they insured they would be taking actions each day that aligned with the priority.

Those 5 things could be anything, but had to match somehow with the priority of becoming a best-seller.  They sent books out, they did interviews, they made calls and talked to anyone who would listen.  5 things a day; day after day. And just like the teacher had predicted, the large tree fell. Today that series of books that no one was originally interested in became known as “the publishing phenomenon of the century” by Time magazine.

Using another analogy, only what you water will grow.

Want to do a better job getting what it is your desire?  Well, whether it is chopping down trees or watering them, both actions require consistent action.  Instead of reinventing the wheel, take a page out of Jack Canfield’s book and start doing 5 things a day until you have what you want.  Need a little direction?  Here is my Simple 5-Step Priority Formula:

Step 1: Decide What You Want.

Step 3:  List 5 Things Per Day To Get Closer To The Thing You Want.

Step 4:  Do Those 5 Things Consistently.

Step 5:  Don’t Give Up Until You Get What You Want. 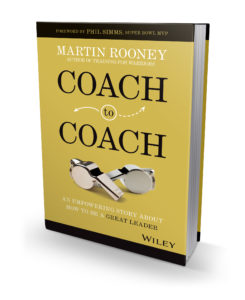 If it sounds too simple, give it a shot.

It is not only exactly what I used to research and write my latest book Coach to Coach, but also how I sold the book, got the testimonials, did the marketing and got the word out in emails like this to you.

Why did I do it?  Because the book was my biggest priority.

How did I do it?  With a little list of 5 things everyday.

Start doing the right 5 things every day and you will welcome the forensic scientists to investigate how you became such a success!

Rooney Rule:  What you value in life will eventually determine your value.

My new book Coach to Coach is just a few days away!  Did you order your copy yet?  As special incentive to order before the March 10 release, I have created value for you in my “Get One, Give One” special offer.

If you order two copies and email me your receipt for the purchase of of Coach to Coach, I will personally send you my “15 Daily Exercises For A Coach” and my “Coach’s Creed” which are both never-before-released PDFs that will be valuable reminders of your special job.

GET ONE GIVE ONE HERE:

Only a few days left!  If you value the power of a coach, please join the movement of making a world of better coaches and one of your 5 ways to do that today is to help me with an order of Coach to Coach.

Can’t wait for you to read it!